Your eyes are like a window for your body. When they are good, you have all the light you need.  But when your eyes are bad, everything is dark. If the light inside you is dark, you surely are in the dark.  (Matthew 6:22-23 NCV) 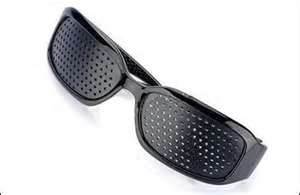 I recently found an almost absurdly simple gadget that compensates for, of all things, eyesight deficiencies.  It’s a pair of glasses (the cheapo plastic ones) whose lenses are completely black except for tiny holes spaced out over the entire surface of each lens.  Now, being very, VERY nearsighted (and most recently, adding the need for bifocals too—how can one be nearsighted AND farsighted?!!),  I was skeptical.  But to my surprise, when I popped out my contact lenses and put these glasses on, I could see!  Not 20/20, mind you, but this old girl normally can’t see more than a precious few inches in front of my face before everything morphs into one blurry blob.  I could actually SEE!

There are some claims that, if these strange glasses are worn for a certain amount of time each day, and in conjunction with certain other eye exercises, one can actually reverse his or her declining vision and eventually no longer need eyeglasses.  You retrain your brain and your eyes to do what they were meant to do all along.  Now, I don’t know if that’s true, but their theory makes sense, considering that the most common vision problems are usually caused by the eyeball becoming elongated rather than round.  The “mirrors” get out of line, kind of like when you get behind the wheel and someone else has the mirrors configured in a way which doesn’t work for you!  By merely changing the angle and intensity at which light enters the retina, suddenly the focus is corrected.  It’s the same principle optometrists use when they determine the strength (the percentage of “bend” in either convex or concave lenses) of your eyeglasses; and corrective surgery goes after the same goal—to restore the angle at which light enters the eye.

In our ever-shrinking world, we have “light” coming at us from all directions—half truths, humanistic worldviews, deceitful marquis messages of so many different, seemingly good things that our eyes are continually scanning and taking in.  And while the little fragments of Confucius, Buddhism, Humanism, Hinduism, Taoism, Intellectualism, and even the Koran may contain some truth, when we combine all those “isms” together, they form a ‘pr-ism’ which scatters our vision every other direction instead of toward the undefiled, unadulterated truth of God’s Word.   When we try to take all of those other things and roll them up into one big religion or paradigm (even trying to mix it with Christianity) it just doesn’t work…and the worst part is, most of what we absorb turns our focus back to our finite life here on earth instead of pointing toward eternity.  Could it be we’re so full of other influences, trying to mix it all in so as not to miss anything, that our vision has turned to blindness?  New Age, old lie.

We need God’s Word.  We need God’s Word exclusively.  God’s Word is perfect and entire, and it needs no special adapter to make it fit.  When our vision is corrected by its complete truth, we can see clearly.  We focus on the right things and we think beyond this short life into a much more vast period of time—eternity.  Is it narrow?  Oh yes.  It’s as narrow as those tiny holes in that pair of glasses, but when we allow our spirit and soul to acclimate to its perfect guidelines, we are receiving LIGHT from a different angle—from a SINGLE angle.  It sharpens the lines instead of blurring them.  It changes our perspective and our perceptions, and aligns them with absolute truth.

I don’t know about you, but I need to see clearly.  I’ve wrapped my toes more than once around a coffee table leg or bedpost in the middle of the night, stumbling for the bathroom without my glasses on.  I’ve made some major life blunders out of lack of focus, too—painful ones.  I’m in an ongoing process of retraining my eyes and brain to see my life and all that’s around me from a different perspective—God’s—and while it’s unconventional to say the least, it brings glorious light into my spirit from the right angle.  Anything less would leave me groping in the dark.  Anything less, I would surely be lost.