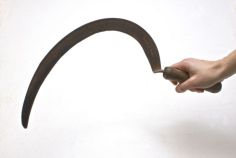 For the word of God is living and active and full of power [making it operative, energizing, and effective]. It is sharper than any two-edged sword, penetrating as far as the division of the soul and spirit [the completeness of a person], and of both joints and marrow [the deepest parts of our nature], exposing and judging the very thoughts and intentions of the heart.  Hebrews 4:12 AMP

When I was a kid, my parents and grandparents lived side-by-side and the only fence we had was around the two properties.  It was wonderful to have a big, collective yard to play in, even though our neighborhood was laid out in a way to where most folks had a 40 ft section of land and no more.  Our ground was a little swampy because I’m told that at one time that’s exactly what it was–swamp property.  The dirt was rather dry on Grandpa’s side, but very rich on the left side of our house…so what little bit of gardening we were able to do between the two yards was sort of divided up by what grows best in each particular type of soil.  A topic perhaps for another post…

Anyway, for some reason this morning I’m remembering this old sickle in Grandpa’s tools, the one whose wooden handle left a big splinter in the palm of my hand before I reacted to his warning not to play with it.  (Love his heart, he used black electrical tape on everything else…how that handle escaped his attention I’ll never know.)  Grandpa’s warning came because he was worried about me chopping off my leg; but the splinter was lesson enough to keep my hands off it in the future.  Now, this sickle didn’t see much action because Grandpa’s primary use of it was to occasionally clear weeds that grew up outside our fence next to the railroad tracks, and to clear the green bean vines from our fence at the end of the last picking…maybe to chop down the fodder after the few times we grew a little corn.  The limited type of gardening we did really didn’t require a sickle for harvesting; so it wasn’t until later that I learned about a sickle’s role in gathering what is grown.  Interesting, that this rusty old gadget had two potential purposes (other than giving little girls splinters and giving her big brother a yellow jacket attack while he was cutting weeds once…another story):  weeding and harvesting.

We read in the Scriptures about the Word of God being a two-edged sword, and I’ve always imagined that as being useful for cutting on both the forward and the backward stroke.  No motion wasted!  Twice the result in half the time! Or, a dual-purpose weapon, of which there are many types of cutting instruments.  Some blades are smooth on one side and serrated on the other side for when a little systematic sawing is needed (ever run into an obstacle where persistent back-and-forth re-application of the Word was needed to cut yourself free from the choking vines of the enemy?).  Or, dare I suggest, the Word is also a sharp sickle that achieves two objectives:  clearing out the things on our soil that hinder growth, and gathering in the harvest from the seed we’ve sown.

You may, up until now, have only been using your “sickle” for part of its potential use. Perhaps you use it to weed out the hindrances, sins, and weights that block your blessing; but then you don’t actually use it to aggressively reap your harvest.  I know many people who are generous to sow and bless, but who feel guilty about being blessed in return.  So they grow a magnificent garden that is left to decay, whereas the fruit could be harvested and used to be an even greater blessing.  If you can’t feel good about receiving the blessing for yourself, don’t worry; it’s not all about you!  The blessing is needed in order to perpetuate more blessing for more people:  a testimony of God’s mercy and provision for those who are called by His name.  Stop leaving your harvest un-gathered!

Still others are using the Word to receive the harvest, but their harvest is puny because it has been choked out by the sins and weights that the sickle could have cleared from the ground before and during the growing season.  If you are sowing heavily but reaping sparingly (and I’m not only talking finances here…investing time, energy, passion, conviction, prayers, and love into people and worthwhile objectives while getting little in return), you may need to take that Word into the preventive and maintenance modes and start clearing the junk from your life.  Is there drama or disappointment or depression where there should be peace and prosperity and perpetuation of blessing on your children and grandchildren?  Do the work.  Don’t let the enemy succeed in choking out your blessing through hidden sin and unbridled carnality.  Whatever the reason your harvest is slim pickings, God can reveal not only the root cause, but also reveal the part of His Word that can hack away at that root!

We even have to clear out the remnants of yesterday’s harvest before tomorrow’s potential can be unlocked.  Some folks leave the fodder of once-upon-a-time movements of God standing as brown, brittle memorials that He once was there in their midst, instead of tilling up the soil for another planting.  Yep, sometimes preparing our hearts for what He wants to do in this season requires letting go of our expectations based on the past.  Hard stuff…we can’t do it without the right tool in our hands.  God’s Word does honor to the past, but it is constantly demanding that we press forward, keep working while it is day.  I don’t know about you, but I desire with all my heart to be moving from glory to glory with God.  I don’t want to sum my entire existence up on what He once did, when He’s still moving and doing and showing Himself mighty to save!  May He look at me–and likewise, may He look at YOU, too–as good ground, and as good stewards who will put His every tool to use to maximize His kingdom and His will on earth!

The truth is, we need God’s Word in every season, in every step, in every creative process, and in every discipline of our lives.  If we will get it off our coffee table, off the nail in the tool shed, and keep it polished, shining, and used regularly, it will not only inhibit the wrong kind of growth in our souls, but will enhance the potential for the right type of growth in our spirit-man!  Don’t let your sickle–your precious copy of the Bible, God’s holy Word– get rusty from only occasional use.  Make it your “Swiss army knife” that finds an application in every area of your life!