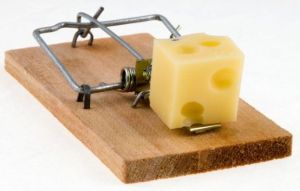 The man was led away with hands bound behind him, screaming obscenities and railing on about a violation of his rights.  He used the word “entrapment” over and over.  An online predator, he had taken the bait…and Heather14 turned out not to be a 14-year old girl, but a 40-year old policeman with a mustache and a pair of handcuffs.  The parents in the neighborhood slept a little sounder that night; and the criminals were restless, as they knew they’d have to either lay low for awhile or move on to someone else’s turf.

In the spiritual realm, when we warn about traps, we mostly teach about the dangers of a trap.  Some traps, however, are a good thing.  Think of a few right around your home.  Mouse traps.  Lint traps.  Insect traps.  Sink traps.  Strategy to prevent something we don’t want from causing us trouble later on.  In war,  both sides set traps.  Why, as Christians then, can we not set a few traps of our own to foil the devices of the enemy?

A trap isn’t something obvious!  It’s usually in a place not seen.  Buried in a field, like a landmine.  Inside the dryer, where all the action’s going on.  In the dark recesses of the cupboard, where we store our food.

When the Psalmist penned a very, very long writing in Chapter 119, nestled in its words was the phrase, “Thy word have I hid in mine heart, that I might not sin against thee.” (verse 11 KJV)  It’s believed that David was the author of this particular Psalm:  David, a man well-acquainted with defensive and offensive strategies of warfare.  This veteran of battle, as a youngster, guarded his father’s sheep from predators; and no doubt, he knew a thing or two about flying under the radar of the enemy.

We have a real adversary!  Talk to someone who’s fallen into sin…you’ll probably hear him or her say, “I was baited right in.  I didn’t see it coming at all.”  Did you know that you don’t have to be the victim of ambush and ensnarement?  God’s Word is your counter-trap!  David knew that.  He meditated on the law of the Lord day and night.  It wasn’t just a trivial piece of data like the gazillion factoids we digest every day from TV and the Internet; it was his Life Source.

Begin, as you study the Word, to digest and apply what it means in your life.  You will be burying right mindsets deep inside your spirit which the devil cannot steal!  Notice Jesus, in the Parable of the Sower, referring to people “along the way side” (Fringe believers?  A light Gospel that tastes great but is less filling?).  These are people who aren’t down in the furrow the Sower has dug for His seeds…they’re just bystanders picking up a word here and there, “…But Satan soon comes and snatches it away from them.” (Mark 4:15 CEV).  You can’t aggressively fend off the tempter with an occasional sermonette!  If the Word rolls around in your soulish realm awhile and gets gobbled up by carnality before it reaches your spirit, it will not help you when you are in dire straits.  While we don’t know many details about Jesus’ life between age 12 and 30, it can safely be concluded that He had His nose buried in the Word!  When the tempter confronted Him in the wilderness, He wasn’t spouting off advice from Dr. Phil!  No, again and again, He said, “It is written!”  I seriously doubt that He had a pocket concordance…no, He invested in hiding that Word in His heart!

More than likely, you know what your weak areas are.  I urge you, today, instead of randomly flipping through and reading a chapter here and there, to begin researching what the Word says about your particular weakness.  Maybe it’s anger; maybe sexual sin; maybe just complacency.  Read those Scriptures over and over!  Know them as well as you know your own Social Security Number.  They are your Spiritual Security Number!  I would have a hard time forgetting my own birthdate, or my address.  I need likewise to have God’s Word that well-hidden in my heart, to keep me from being ambushed by the attack of the devil.

“Lord, today we come to You, proactive in our determination to walk holy before You.  Speak to us about those areas in our lives where we need to shore up our defenses.  Give us tenacity to revisit what Your Word says—over and over—about these weaknesses, until Your Word becomes second nature to us.  Give us a hunger for righteousness, an appetite for Your Word, and help us not to be ignorant of the devices of the devil.  Keep us on our toes!  Keep it in the forefront of our minds to set a watch about what we digest…if it does not line up with Your Word, help us to spit it out like spoiled food.  May we please you in all we do today, in Jesus’ name.  Amen.”