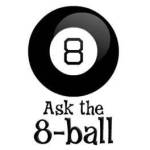 When I was a little kid, one of the toys which I had (probably a hand-me-down from my cousins, or something that really belonged to Karen or Lee but seemed like it was mine) was an “Eight Ball.”  It was this black ball about the size of a grapefruit or bigger, filled with liquid and a die with several sides.  The little die would float to the window, and its various sides would have random answers on them—sort of like the one or two-word expressions printed on those crunchy little candy Valentine hearts.  So the amusement was to ask a question, shake the ball, and wait for the “answer” to appear in the window.  We used to make up silly questions, like, “Will I marry such and such?” and just peal with laughter at the answers.

How often do we go to our Heavenly Father in prayer, asking for something with a preconceived notion of what we want the answer to be?  At times, we even “shake the eight ball up,” hoping He’ll give us a different answer from the one we didn’t want.  That works with the toy, but it doesn’t work with God.

We see various examples of people in the Bible who asked God for something multiple times, for various reasons.  Gideon, a young Manasseh tribesman, placed a fleece before God.  He requested a different sign each time, to confirm whether the Lord was truly calling him to be the one to break the stranglehold of idolatry off the Israelites.  Paul, wanting to be free of some mystery “thorn in the flesh” malady, repeatedly asked God to remove the thorn, only to get an answer, “My grace is sufficient for thee.”  David inquired of the Lord whether he and his men should go to Keilah to fight the Philistines, to which God answered, “Go…I will help you conquer them.”  But because the men said they were afraid, David asked a second time; and the answer was still the same.  And the result was the same as God had promised!

We all have our reasons for asking again.  Perhaps, like Gideon and David, we just don’t want to act in haste.  It can be a scary thing to think we’ve missed God.  Or like Paul, we may feel frustrated when we keep praying for healing or change, and the problem will not budge.  Or, we can even be like an Abraham who, in intercession for the people of Sodom and Gomorrah, asked for the Lord’s mercy for the sake of any righteous people living there.  And though Abraham kept narrowing down the number of righteous, he was not able to save the cities.  God, however, did honor Abraham’s prayers, not by sparing the cities, but by having angels lead Lot and his family out of danger.

You may be in a situation today where you are coming to God with your request again, not because He has failed to answer your previous prayers, but because you are hoping for a different response.  It’s not wrong to ask…in fact, we can develop great faith as we travail in prayer and have to endure a season of waiting.  It is important, however, to note that God will only answer according to His Word.  And, He answers according to our faith.  We cannot ask Him for an answer which violates His Word, and expect Him to change what is written.  That’s one reason why it’s so important to know what His Word says, and pray that Word back to Him!

John says it like this, “This is the confidence we have in approaching God: that if we ask anything according to his will, he hears us. And if we know that he hears us—whatever we ask—we know that we have what we asked of him.” (I John 5:14-15 NIV)  There are different types of requests, of course:  times when we need the Lord to direct our steps in a certain matter; or times when we see someone careening toward destruction and we pray for God to stay the hand of death so that he or she will not die in a lost state.  Keep praying!  Keep asking!  If the Lord delays an answer, keep your confession of faith.  He operates on a timetable that is totally unlike ours.  Like the unjust judge who finally grants the widow’s petition, and the sleepy neighbor who finally gets up and answers the man’s request for bread to serve an unexpected guest, the recipient of the blessing is rewarded for  shameless persistence.  God usually doesn’t drop a movie screen down out of heaven and give us a step-by-step preview of how He’s going to resolve our problems, but we can be sure that if we pray according to His will, He’s got us covered. Ask Him!  If it’s a matter of directions, He’ll give them to you.  If it’s a matter of wait and trust, that’s what we must learn to do—and above that—to obey!  Don’t rush Him, don’t try to help Him work it out YOUR way, just give it to Him and turn loose of the control wheel.

In a situation where God’s answer is something other than what you’re seeking, know this:  He is continually working toward the eventual good of His children.  There was a reason why He required Paul to trust Him for grace rather than delivering him of the “thorn.”  Perhaps Paul could have become exalted or haughty had he not had to rely on God’s continual help…or perhaps the “thorn” helped him to empathize with those who struggle.  We don’t know.  Still, Paul went on to write a sizeable chunk of the New Testament books, even with the condition that plagued him!  God may have you situated right in the eye of the hurricane…not because He’s cruel or doesn’t love you, but because you are there to help someone else come to know Him.  There are many countless people won to the Lord by the witness of someone experiencing the same difficulties as they are, but with hope and a testimony.

Learn to differentiate between requests which would be answered through a Rhema word, and those requests which can rely solely on what’s already written.  Perhaps you need a “stop, go, wait, turn this way or that way,” kind of answer.  He’s pleased when we involve Him in the decision-making of our every day lives; and believe me when I say, if you listen, He will speak!  However, sometimes we don’t have to receive a word because we already have HIS Word…written down.  A true Rhema will never contradict what God’s written Word has spoken.  And, if God’s answer is “no,” honor His final say in the matter.  Sometimes what we’re asking for has hidden repercussions…and God knows that!  I must confess, there have been times when I didn’t ask His will because I wanted something that, deep down in my heart, I already knew He did not want for me.  If we would but learn to trust Him and not lean to our own understanding (and our own foolish pursuits!)…

Lay down your Eight Ball today and just go to the Word for your answers.  If your situation requires a messenger, the Lord will place a mature believer in your path to deliver it.  Don’t gather an assembly of your peers to “agree” over something which He’s already said no to.  If the rightly-divided Word of God, taken in context,  says a particular thing about what you’re seeking, you cannot shake it up and get a different answer.  Take God’s answer in faith that He has a much greater plan…one that always involves eternity and not just where you are today!  He loves you, and there’s nothing random or chance about His plan!

This site uses Akismet to reduce spam. Learn how your comment data is processed.