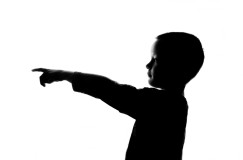 “But God’s angry displeasure erupts as acts of human mistrust and wrongdoing and lying accumulate, as people try to put a shroud over truth. But the basic reality of God is plain enough. Open your eyes and there it is! By taking a long and thoughtful look at what God has created, people have always been able to see what their eyes as such can’t see: eternal power, for instance, and the mystery of his divine being. So nobody has a good excuse. What happened was this: People knew God perfectly well, but when they didn’t treat him like God, refusing to worship him, they trivialized themselves into silliness and confusion so that there was neither sense nor direction left in their lives. They pretended to know it all, but were illiterate regarding life. They traded the glory of God who holds the whole world in his hands for cheap figurines you can buy at any roadside stand.”  Romans 1:18-23 MSG

Remember in the children’s book, The Emperor’s New Clothes, how an entire kingdom of people got caught up in an important social figure’s delusion because those folks didn’t want to be judged in a negative way?  The pitch to this con was that, only the wise, intelligent people in the kingdom were able to see the clothes.  In wearing them, the emperor could separate the educated from the fools.  And out of fear for their reputations, their positions, the people pretended to see the imaginary fabric.  They went right along with the whole charade, and even applauded, ooh-ed and ahh-ed as their proud hero paraded down the street in nothing but his skivvies. It took an innocent little child to call out the absurdity of the situation...”But he’s not wearing any clothes!” If you’ve never read it, you should. The storyline is shockingly parallel to the hour in which we live.

We live in a 21st Century realtime version of the Emperor’s New Clothes, where no one wants to admit that the status quo is out of hand. How we want the acceptance of others, so we choke down any and all ridiculous demands that a few make in order to garner favor.  If you disagree, you might even be sued by your government and lose your business license.  The issues splattered across the headlines as we speak would be funny if they weren’t so tragic. Oh, it’s not popular to contradict the absurd ideals fabricated by our pop culture…no doubt I’ll be met with some shrapnel for saying so. But not even our culture sticks to its own ideologies for longer than a season or two, or until they get bored because it’s not obscene or unreasonable enough. Our appetite demands that our movies be increasingly filthier, our language coarser, our crimes more violent, our rights more invasive of other people’s rights. Our “emperor” of the modern world isn’t a man or woman; it’s the desire to dominate the majority; to win the argument, to create the illusion that our ideas are more relevant than truth itself. It’s a thought system and it stinks in our Creator’s eyes because we reject truth for a lie and we do it without batting an eyelid.

Today’s shameful headlines will be upstaged by tomorrow’s stunts by the popular and powerful, and folks will go right along with outright lies to keep from being labeled closed-minded, bigoted, or archaic. Just so you know, I’m not talking about prejudice, hate crimes, civil rights, or social injustice here…I’m talking about the most basic, common-sense standards that have been flipped on their ear. And the crowd cheers “Bravo! Beautiful! Amazing! Superior thinking!” Hey, if celebrities are touting these far-fetched ideals as relevant, true, and not to be questioned, surely it’s got to be right…right? The fabric is only invisible to the intellectually-inferior. Plus, if you won’t concede to their logic, then you’re not only an opposing view–you are now a bad person. You lose sponsors. Others sever ties out of fear of losing popularity or status. Businesses pull contracts and relocate to get away from association with you. You may even wind up in court or on the unemployment line.  This isn’t really a demand for respect, for acceptance…it’s our twisted society’s way of saying, “You WILL do what we want, and you WILL like it.  Or else.”  And it’s being endorsed by our leaders just so they can garner more votes.  There, I said it.

We don’t even realize we’re going along with it just to appease someone else’s demand for the last word, (and to save our own reputations from ridicule). We’ve gotten so good at playing along that we even think we see the emperor’s imaginary clothes. And somewhere off in the distance, the “spinner” of the imaginary covering is laughing all the way to the bank. Will it take another child, oblivious to modern society’s uber-relaxed ideas of propriety, to blurt out the truth and wake up the deluded masses?

Pray for our nation. There are no words to describe some of the things that have elevated themselves to even be issues among us. Said cautiously and with love…but as honestly as I know how. I’d be really faking it right now if I pretended not to see how embarrassingly exposed we have become as a people. God, please snap us out of our blinded condition. It’s beyond humiliating; it’s becoming dangerous.

This site uses Akismet to reduce spam. Learn how your comment data is processed.